Guimarães – Explore the Birthplace of the Portuguese Nation

Strongly associated with the foundation of Portugal, the city of Guimarães was home to major political and military events that culminated in the Battle of São Mamede and led to the independence and origin of a new nation in 1128. Guimarães is also often called ‘the cradle city’, as it’s widely believed that Afonso Henriques, the first king of Portugal, was born here.

Historically, this is one of the most important cities in the country, and in 2012 it was the European Capital of Culture, so you can expect plenty of ancient, beautiful buildings everywhere you go.

This medieval building is one of the most well-preserved strongholds in Portugal. Built in the 10th century, this castle is also believed to be the birthplace of Afonso Henriques, so many people see it as a national shrine. Mass in honour of the King’s birthday is still celebrated here every year, and visitors can also climb the narrow steps to the top of the tower where an amazing view of the city awaits.

Named after the old olive tree in the square, this historic location is a well-preserved example of how a medieval settlement evolved into a modern town. There are many different notable buildings here, as this square is considered to be the historic centre of old Guimarães, including the Church of Nossa Senhora da Oliveira. 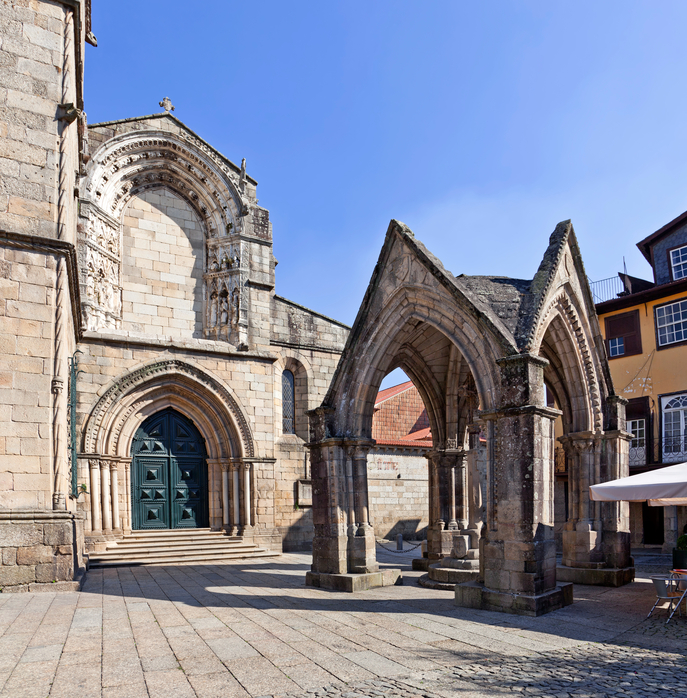 This is perhaps the dominant feature of the location, and was once a convent founded by Afonso Henriques in the 12th century. Nearby you’ll find the Museum of Alberto Sampaio, which specialises in religious art – here you’ll be able to see more than 2000 historic objects, including a vest worn by D João I in the Battle of Aljubarrota in 1375, and explore the beautiful cloisters.

This medieval estate was built between 1420 and 1422 and was the former residence of the first Dukes of Bragança, a title given to the male heir of the Portuguese Crown. The building was left to ruin until the Estado Novo regime, when Salazar finally had it restored, and now it’s a National Monument and Official Residence for the President.

If you’re looking for something a little bit different and want to explore the surrounding areas of Guimarães as well, this settlement from the Iron Age is the right place for you! Located 15km north of the city, this is one of the most important archaeological sites in Portugal, and was established around 500 BC, although it was likely under Roman rule from 20 BC. Excavations have revealed a complex network of streets, cisterns, sewers, houses, water conduits and more, and many pieces of pottery and jewellery have been discovered as well.

Guimarães is a city you can’t miss! From its strong connections to the birth of Portugal as we know it, to the stunning ancient buildings you can find all around you, you won’t lack for things to see or do. We have many Pousadas of Portugal at your disposal, which provide the perfect base to explore the country, no matter where you choose to go, so book your stay with us today and we’ll help you find the right one for your holidays!
This site uses cookies - Find out more here
Accept